It’s easy to discount cow nutrition during early pregnancy, especially since 75 percent of fetal growth occurs during the last two months of gestation. Producers often supplement heavily in preparation for breeding but wait until the last half of the pregnancy to focus on supplementation again. However, maternal nutrition during early pregnancy is much more important than it might initially seem. 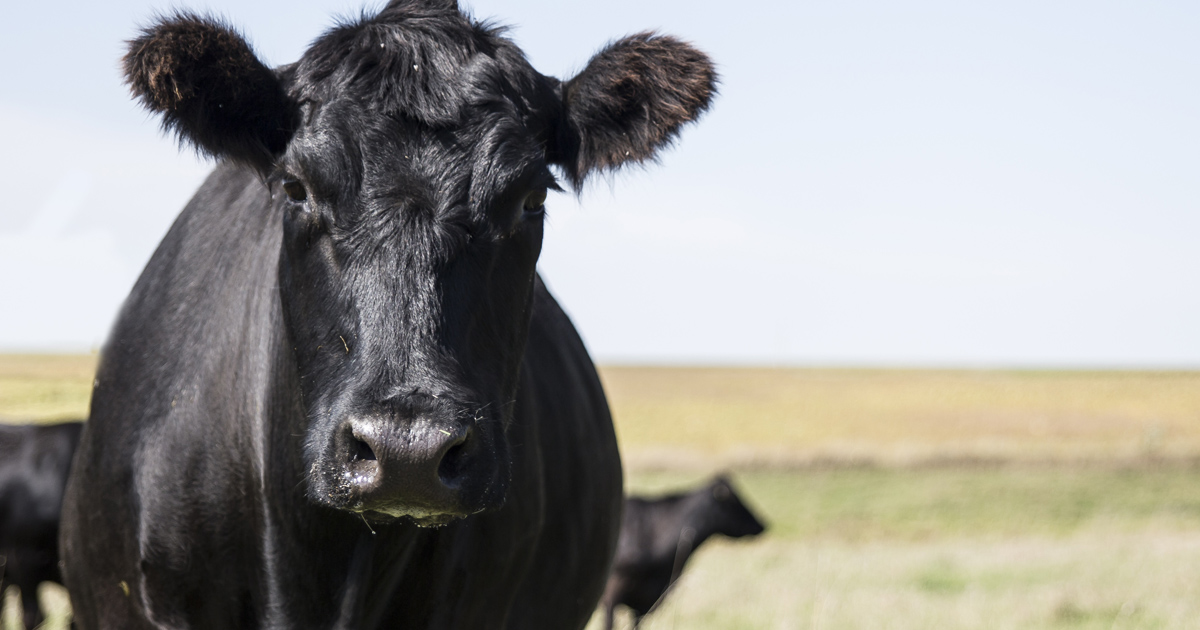 Fetal programming simply means that the blueprint for how an animal will perform in life are laid out during fetal development. Fetal development is controlled by a complex combination of both maternal and fetal mechanisms. Intrauterine fetal growth restriction occurs when these mechanisms are disrupted by a variety of actions, including under- or over-feeding cows during critical periods. Fetal growth restrictions can have long-term effects. Results have repeatedly shown that stunting in-utero growth can affect continued growth, feed efficiency, meat quality, fertility and overall health for the rest of the animal’s life. For example, steers from cows who were nutritionally restricted during pregnancy were observed to have both reduced body weight and carcass weight at 30 months of age compared to steers born to cows who were fed adequately during pregnancy.

The first few months of gestation are critical for the development of the placenta, the organ that surrounds and protects the developing fetus. It controls all nutrient uptake, gas exchange and waste elimination by the fetus. The placentomes — where the maternal caruncle and placental cotyledon join — are crucial to the bovine placenta. Placentomes facilitate all physiological exchanges between fetus and mother. During this critical early gestation period, the number and size of the placentomes are increasing, as is their vascularity, which controls blood flow. Decreased blood flow between the uterus and the placenta is a primary cause of intrauterine fetal growth restriction.

Pregnancy leads to increased metabolic activity (both maternal and fetal), which, in turn, increases the production of oxidants. Waste oxidants can cause cell damage if they are not neutralized by antioxidants. Just like in human nutrition, antioxidants are very important in livestock diets, and deficiency in antioxidant minerals (e.g., selenium, copper, manganese or zinc) reduces survivability for embryos and fetuses. Studies have shown that supplementation with biologically available forms of these trace minerals improves reproductive performance, particularly in cattle who dealt with stress in early gestation.

Early gestation is also a critical period for fetal organ development. The trace mineral status of the dam is critical because micronutrient nutrition is essential for cell growth. When cells divide, DNA is transcribed to RNA, which is then translated into the proteins that make up the structure of the cell, as well as the enzymes found inside. At every step of the metabolic process, trace minerals are needed as signals or catalysts. Because different organs develop at different times, deficiencies will manifest themselves differently depending on what moment they occur. A heartbeat is detectable as early as 21 days after ovulation. The limbs begin developing by day 25, followed by the sequential development of internal organs. A calf’s sexual organs start developing within the first 45 to 60 days. This is particularly significant for a heifer calf, since she will be born with every oocyte she will ever have. Deficiencies during organ development can leave an impact that lasts an entire lifetime. 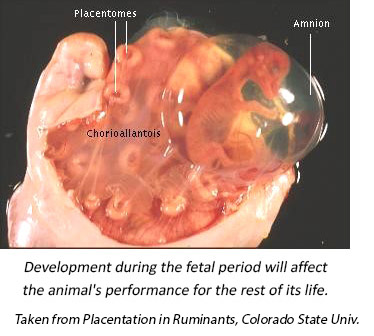 So, what does all of this mean?

In light of what is known about fetal programing, future strategies for optimal growth and health in cattle production should begin with prenatal management. Essentially, it all boils down to giving cows what they need at the exact moment they need it throughout the pregnancy. It is clear that nutritionally restricting cows and heifers during early gestation will negatively impact fetal development. Conversely, the animals should not be overfed during this period either, as over-conditioning also stunts fetal growth. Providing the necessary trace mineral and vitamin nutrition for the entirety of the pregnancy is critical. Managers should use tools — such as body condition scoring and nutritional analysis of forages and commodities — to balance diets and allow for precision supplementation during the various stages of pregnancy.

Blueprint® mineral supplements help combat deficiencies and natural antagonisms by delivering organic chelated Bioplex® metal proteinates and Sel-Plex® selenium yeast as the only sources of trace minerals. Thanks to their increased efficiency, they are delivered at a targeted rate that is below the current industry standards. Lower trace mineral levels and the reduction of sulfates and oxides in the diet reduce unwanted biochemical reactions to further increase animal efficiency. Bioplex and Sel-Plex are better absorbed and stored in tissues, helping cows build the adequate body stores needed for calf development, lactation and rebreeding. There are multiple formulations available in the Blueprint line that can easily be interchanged to provide consistent nutrition throughout the year as the nutritional needs of your cattle change.

Maternal nutrition — including mineral nutrition — during gestation is just as critical in the early stages as it is toward the end of the pregnancy. Fetal programming shows us that nutritional disruptions during pregnancy can have far-reaching implications later in the calf’s life, even into adulthood. Using Blueprint mineral and vitamin supplementation throughout the pregnancy will help optimize fetal development and allow calves to maximize their genetic potential.

Blueprint®, Bioplex® and Sel-Plex® are registered trademarks of Alltech.