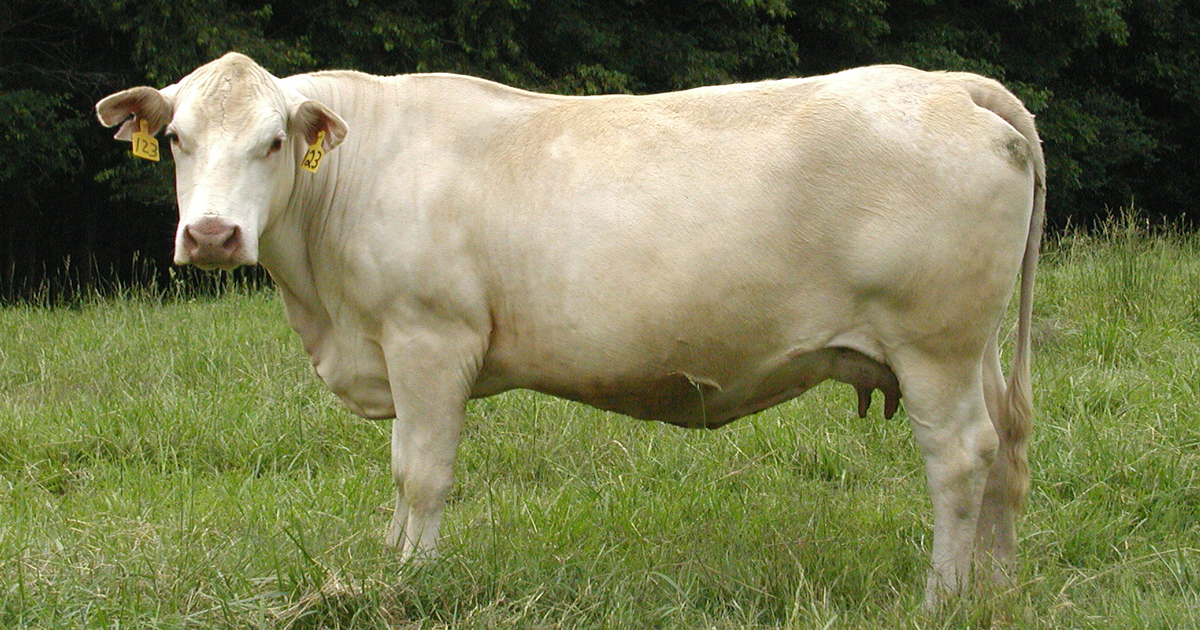 The profitability of a cattle herd is closely tied to its reproductive efficiency. Reproductive failures in cows are influenced by several factors including the environment, animal health status, and bull fertility. However, number one above all of these is nutrition.

Are my cattle receiving proper nutrition?

Nutrition directly affects reproductive performance. Body condition scoring, looking at your cattle to determine their relative fatness (fleshiness), provides a simple means to measure an animal’s nutritional reserves. The most commonly used body condition scoring system rates cattle on a scale from 1 to 9, with 9 being morbidly obese and 1 being a walking skeleton.

Unfortunately, visual appraisal can be subjective -- thin to me may not be thin to you. There are a few guidelines to go by. Thin cattle have a sharp, angular appearance. Cattle in ideal body condition are fleshy and have good muscle tone (see image above). Fat cattle have a square, boxy appearance. Keep in mind that shrink can make cattle appear thinner than they actually are, while late pregnancy can make cows look fatter than they really are. Assessing body condition scores at key times in the production calendar can help cattlemen customize their feeding decisions for maximum profitability.

Relation between body condition and profitability

Research has shown that variations in body condition are directly related to reproductive performance and thus profitability. Thin cows do not cycle as early as heavier cows and have lower overall conception rates. They tend to take longer to get pregnant and thus have an increased calving interval and wean younger calves. Calves born to thin cows have decreased survivability and lowered growth rates. The overall profitability of thin cattle is lower than cows in ideal or fat condition.

Research from the University of Georgia confirms that thin cows do not rebreed well. Cattle need to breed back within 80 days from the time they calve in order to maintain a yearly calving interval (365 days – 285 days/pregnancy = 80 days) A summary of UGA studies showed that only about half of thin cows were cycling by 80 days after calving, while over 80% of cows in ideal or fat condition were cycling within this 80-day window. Also, it was shown that young cows (first-, second- and third-calf) that were thin had lower pregnancy rates than thin mature cows. Studies at Clemson University concluded that first-calf heifers that calved in ideal body condition had heavier calves without increased dystocia than those in thin body condition. In a summary of 12 trials conducted in Florida, Texas and Oklahoma with over 4000 beef cows, pregnancy rates were shown to improve dramatically as body condition scores improved from thin to ideal. Thin cows tend to breed later, so they calve late into the calving season and thus their calves are youngest at weaning. In addition, thin cows have less energy reserves to produce milk and as a result tend to raise calves that grow slower (See Table 1). Economically, thin cows raise lighter calves that make less money than the calves of cows in ideal condition (See Table 1). In this study, it was shown that a thin cow earns $187 less per year than a cow in ideal body condition.

Practical use of body condition scores

There are several key times during the production calendar to evaluate body condition form maximum benefit. These are before calving (about 90 – 100 days prior to calving), at calving, at weaning and at breeding. By monitoring cattle during these times, cattle owners can manage available resources and make appropriate decisions to maintain cattle at ideal body condition for optimum productivity. Cows should be in ideal to slightly fat condition at calving and at breeding for best calf growth and rebreeding performance, respectively. If cattle are identified as thin prior to calving or at weaning, you will have the opportunity to improve body condition through supplemental nutrition in time for the pivotal calving and breeding periods. Keep in mind the study mentioned above, a thin cow earns $187/year less than cows in ideal body condition. It is often much cheaper to maintain a cow in ideal condition than it is to allow her to become too thin and then try to gain weight back or to allow her to remain too thin.

How do cattle maintain body condition?

Overall quality and quantity of available forages, parasite load, presence of disease, genetics, weather and dominance status all affect a cow’s body condition score. Cattle tend to be in highest body condition in mid to late summer and then slowly decline throughout the winter with their lowest body condition in late winter or early spring. During winter months, most cattle producers rely primarily on hay to provide for their cattle.

Hay quality varies greatly from year to year and even cutting to cutting. Most average hay will fail to meet all of the protein, energy and mineral needs for lactating cows and growing steers and heifers. Poor quality hay should be fed to dry cows and mature bulls whenever possible, but even these groups may need protein and energy supplementation in order to maintain body condition entering the winter months. Also, thin dry cows and bulls will need a supplement program to allow them to gain weight, especially during winter months. A good mineral supplement is always recommended when feeding hay to all groups of cattle in order to prevent deficiencies.

For more info about the SWEETLIX line of protein self-fed supplement products for cattle and information to help you decide if they will fit into your management situation, see your local SWEETLIX dealer or call 1-87-SWEETLIX.