Lice can be a problem for goat producers, especially during the winter months. Louse infestations can cause intense irritation, restlessness and loss of condition. While lice are found on all species of livestock, goat lice are host specific and only attack goats and their close relatives such as sheep. Due to modern production practices, it is almost impossible to prevent louse infestations; however, with careful management we can keep them under control. 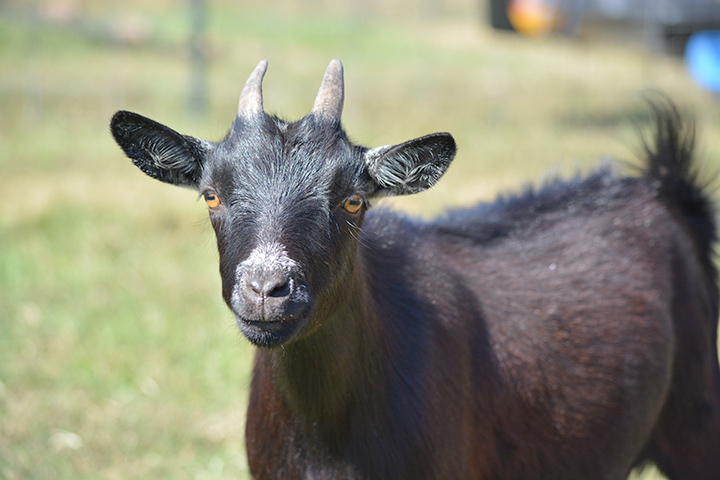 There are two general types of lice, biting and sucking lice. Biting lice are most common but least bothersome. Biting lice live on the skin surface feeding on scales, bits of hair and other debris. They do not feed on blood.

Sucking lice, on the other hand, have piercing mouth parts and feed on the blood of its host. Five species of sucking lice attack goats. The following are of importance:

Feeding lice cause irritation for the host as mentioned previously. Louse infested livestock may be seen rubbing and scratching on fences and other objects. Severely infested animals may develop raw areas on the skin due to constant rubbing. Their hair may be thin and matted and scabs may develop. Raw areas may result in open sores, which can become infected. Note that symptoms of louse infestation may resemble mange. It is also not uncommon for goats to suffer from mange and louse infestation at the same time.

Lice spend their entire life cycle on their host. Female lice glue eggs or nits on hair close to the skin. These eggs hatch in 9 to 18 days. Lice begin laying eggs when they are about 28 days old and die after reproduction. Therefore, there are several overlapping generations each year.

Lice are generally transmitted from one animal to another by contact. Transmission from herd to herd is usually accomplished by transportation of infested animals. Lice cannot survive more than a week apart from their host. Under favorable conditions, eggs clinging to shed hairs may continue to hatch for 2 to 3 weeks. However, lice are most often introduced to herds by bringing infested animals into the herd. Louse populations fluctuate during the year, with populations lowest in the summer and highest during late winter and early spring. Livestock should be checked for lice frequently in the fall, when populations begin to rise. If animals are rubbing and scratching during this time of year, they should be treated to prevent severe infestations from developing.

Louse control is difficult since pesticides do not kill louse eggs. There are several registered insecticides available to control adult lice. Louse control can be administered by spray, pouron, back rubs and dust bags. As always, read and follow label directions when using insecticides. In order for insecticides to be effective, the whole herd must be treated simultaneously and care must be taken to cover the entire animal with insecticide.

Dipping vats have also been used successfully to treat lice in many species of livestock. They are very effective in completely covering the animal, but they are costly to construct and not transportable. Additionally, a great deal of dip solution is left over after each treatment. This method is most effective in situations in which large numbers of goats need to be treated.

In summary, lice can cause substantial economic losses. Lice can cause a reduction in meat and milk production, and can cause animals severe irritation. If you notice any signs or symptoms of infestation, treat your goats before it becomes a serious problem.