Bloat is a condition in ruminants (cattle, sheep and goats) that is marked by abdominal distention due to accumulated gas in the rumen. These gases are the normal by-product of digestion of feeds in the rumen and are usually harmlessly belched out by the animal. Bloat results when the animal is unable to belch. Left untreated, the gasses compress the heart and lungs and can result in death. 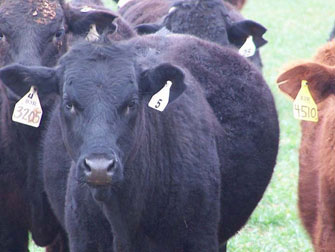 Frothy bloat (also known as pasture or legume bloat) is most often associated with ruminants grazing lush, immature, legume pastures (alfalfa or clover) or cereal grain pastures (wheat, oats or rye); however, animals fed high quality legume hay may also be susceptible. In frothy bloat, the gases mix with rumen contents to form very stable foam. Plant proteins are the primary foaming agent in the rumen contents. Because the gas is trapped in thousands of bubbles it is impossible for the animal to eructate or belch to release the gas. It is also impossible to simply release the gas with a stomach tube or trocar as with other types of bloat. Frothy bloat develops very quickly and often your first indication of trouble will be a dead or dying animal.

The signs of bloat are obvious. A marked distention of the rumen on the left side of the animal (see Figure 1) appears suddenly. As bloat progresses, the skin over the left flank becomes more and more taut and cannot be pinched or “tented”. Difficulty in breathing will occur with grunting, breathing through an open mouth, tongue protrusion and a dropped head. In severe cases, death can occur in as little as a half hour from the onset of symptoms.

The Costs of Bloat

Due to the rapid growth of clover under ideal conditions, a cattle producer can literally wake up one morning to dead cattle. Death losses of 1 to 5% are common during frothy bloat conditions and can go as high as 10 to 20% in severe outbreaks. Even sub-acute cases of frothy bloat are costly to cattle producers. The discomfort caused by mild bloat, will cause cattle to eat and drink less (much like human indigestion), resulting in lowered production. Large aggressive feeders will be most susceptible.

Since the gas in frothy bloat is trapped in foam, it is necessary to introduce an anti-foaming agent into the rumen. This is usually done through a stomach tube in severe cases. Because it is extremely easy to mistakenly pass a stomach tube into the lungs, inexperienced producers should call a veterinarian to perform this procedure. Some common anti-foaming agents are poloxalene (Bloat Guard®), vegetable oils and mineral oils. Bloat Guard is the only FDA-approved medicant approved for prevention of frothy bloat in cattle. Bloat Guard reduces the surface tension in the walls of the bubbles so that they can combine with other bubbles and burst, thus releasing the gas.

Because frothy bloat can cause death without warning, prevention is key for risk management. There are several management strategies that you can implement to help reduce the incidence of pasture bloat. These include:

Bloat can be deadly and even mild cases result in production losses. Because onset of bloat is rapid, preventative measures are the best course of action. SWEETLIX Bloat Guard Pressed Blocks provide an easy, reliable method to deliver protective amounts of poloxalene on a daily basis. Only SWEETLIX manufactures Bloat Guard in a free choice block form. When used in conjunction with other preventative management practices, cattle producers can safely utilize these bountiful clover pastures without worry or loss.

Bloat Guard® is a registered trademark of Phibro