Given how mobile our national cattle herd is now, it should be of no surprise that cases of anaplasmosis are on the rise. Anaplasmosis is most commonly found in the United States in the southeastern, gulf coast, lower plains, and western regions, however; cases have been reported in all states except Hawaii and Alaska. Here’s why you should be concerned… 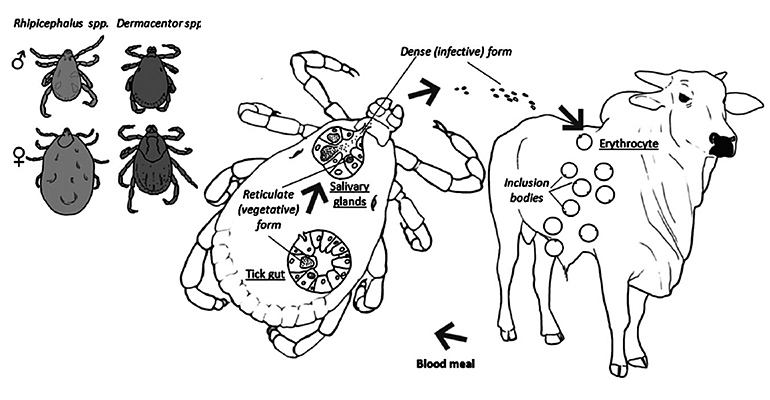 Anaplasmosis is a contagious, blood-borne disease most commonly caused by the parasite, Anaplasma marginale. The disease is spread through the transfer of blood from animal to animal. This may occur mechanically through insect bites (ticks, flies and mosquitoes) or through use of contaminated instruments (needles, dehorners, castration equipment, etc.).  It can even transfer from dam to fetus across the placenta.

Symptoms Are Worse in Older Cattle

Clinical symptoms exhibited depend upon the age of infected cattle. Calves undergo mild infections and rarely show symptoms but become carriers for life. Cattle 1-2 years in age exhibit severe symptoms, but rarely die. Cattle over 2 years of age become severely ill and up to 60% are likely to die unless treated. Cattle that survive severe anaplasmosis infection without treatment are often culled due to lowered production and are immune carriers for life. A carrier animal’s blood is infective for susceptible cattle. 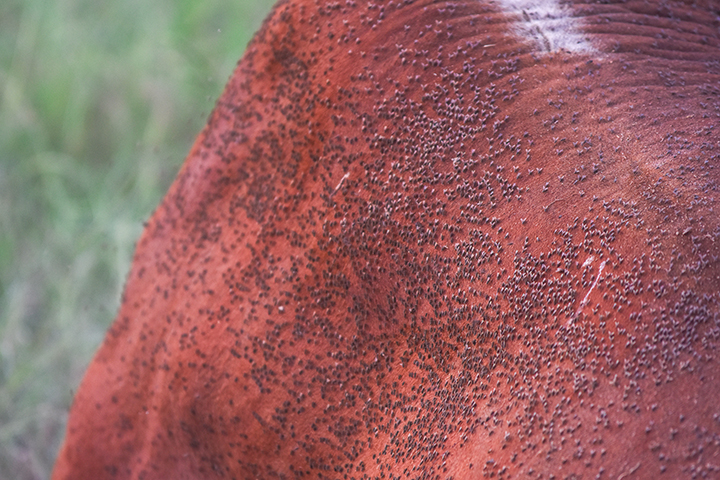 Anaplasmosis symptoms result from red blood cell destruction. Disease symptoms include: fever of 104° to 107°, anemia, depression, decreased feed intake, yellow mucous membranes, rapid breathing, increased belligerence, dehydration, constipation, and sudden death. Diagnosis is confirmed through a blood test. Other diseases that can be confused with anaplasmosis are leptospirosis, bacillary hemoglobinuria and pasteurella. Always consult with a veterinarian to confirm diagnosis if you suspect anaplasmosis.

Outbreaks occur when carriers and susceptible cattle are pastured together with no control program in place. Prevention methods include measures to control biting flies and ticks. Also, care must be taken to sanitize surgical equipment (dehorners, castration instruments, etc) between animals and to change needles often when administering vaccines and medications to reduce the risk of transmission. Other prevention methods include segregation of cattle into “carrier” and “clean” herds and managing them separately. There are vaccines available, but reported side effects make vaccinations unpopular.

Use of one of the tetracycline class of drugs in the disease’s early stages usually ensures cattle survival. Depending on the drug, administration methods include injection or daily intake of medicated feed or medicated feed supplements. Because infected cattle are more susceptible to handling stress due to their lowered red blood cell counts, many prefer to treat via medicated feeds or supplements.

Oral delivery of chlortetracycline (CTC) via a medicated feed or medicated feed supplement now fall under the Veterinary Feed Directive (VFD) rules implemented by FDA starting January 1, 2017. You probably already know this, but to review, this new rule means that you can only feed CTC to your cattle under the direction of a licensed veterinarian with which you have a valid veterinary-client-patient-relationship. You must have valid VFD paperwork in order to purchase CTC-medicated feeds, premixes or supplements. Producers must use these medicated products exactly as indicated on the FDA-approved label. There is absolutely no extra-label usage allowed, even by veterinarians. If a label states that it is to be mixed with feed, it must be mixed with feed. Use contrary to the label directions is a violation of the VFD.