Many goat producers unwittingly sabotage their mineral supplement program by providing yellow sulfur salt blocks for the purpose of external parasite control in place of or in addition to granular mineral supplements or mineral blocks. All one needs do is consult any of the Internet chat groups or visit the local sale barn to hear armchair veterinary advice about the so-called advantages of feeding sulfur salt to livestock. This article is intended to debunk the myths surrounding the feeding of sulfur for the purpose of parasite control and to bring to your attention the detrimental effects of excessive sulfur in the diet of goats. 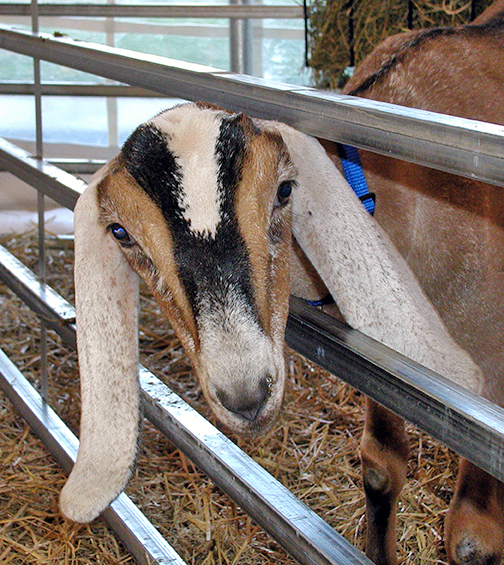 Sulfur has historically been used as a treatment for external parasites. Sulfur-containing compounds are even today extensively used to control external parasites of horticultural plants. Animal use is usually in the form of a lime-sulfur solution, which is applied externally to the animal. Topical use of sulfur is moderately successful in external parasite control. However, there is no evidence that supports the belief that added sulfur in the diet controls external parasites such as flies, fleas, ticks, etc. Use of sulfur in this way falls into the category of “wives’ tales and folk medicine”. Not only has sulfur salt not been proven to control parasites, but also, excess sulfur can actually be detrimental to your goats.

Sulfur is Necessary in the Diet

Sulfur is an essential mineral that is necessary for life. It is contained in every cell of the body. Sulfur concentrations are particularly high in hair, skin and hooves. Sulfur is found in many key compounds within the body including amino acids (methionine, cystine, cysteine and taurine) and B vitamins (thiamine and biotin). Compounds containing sulfur are responsible for structural integrity (collagen), chemical reactions (enzymes), oxygen transport (hemoglobin), energy regulation (insulin), and milk let down (oxytocin), as well as many other vital functions.

Despite the fact that sulfur is a key mineral essential for life, addition of inorganic sulfur to the diet is not necessary for the health of most animals. Most animals receive adequate amounts of sulfur through organic sources (sulfur-containing amino acids, biotin, thiamine, etc) in their diet. Plants and microbes are capable of synthesizing sulfur-amino acids from inorganic sulfur, thus many feedstuffs typically fed to goats are rich in sulfur including: alfalfa, corn gluten feed, molasses, cottonseed meal, soybean meal, barley, yeast, etc. In fact, research has shown that excess sulfur in the diet results in reduced animal performance.

The Negative Effects of Excess Sulfur

The margin between desirable and harmful concentrations of sulfur in a ruminant diet is surprisingly small. When excessive amounts of sulfur are present (greater than the ability of the rumen microbes to utilize it), the excess sulfur is absorbed into the animal’s bloodstream as sulphides.

Sulphides are toxic and often result in reduced appetite and growth rate. Necrosis of neural tissues can also occur. In addition, some sulfur-compounds can destroy thiamine activity. Many now believe that development of PEM (polioencephalomalacia) is more closely tied with excess sulfur rather than thiamine deficiency. Classic symptoms of PEM include goats that often press their head against a wall or post or become “star gazers”, where they stand with their head back over the shoulders looking up at the sky. If not treated with thiamine, most affected animals will die within 48 hours.

Sulfur directly interacts with other essential minerals including copper, selenium and molybdenum. Chronic exposure to high sulfur in the diet has an adverse effect on ruminants, particularly by inducing copper deficiency. Excess sulfur in the rumen reduces the bioavailability of copper by formation of insoluble copper sulfides, which cannot be utilized by the animal. By rendering the copper that is present unavailable, the copper requirement is thus increased by the presence of excess sulfur. Copper deficiency is exacerbated when excessive levels of molybdenum are present.

Copper is needed by a variety of key systems in the body. Numerous key enzymes necessary for reproduction, immunity and growth require copper. In addition, copper is necessary for proper metabolism of iron, maintenance of connective tissue, pigmentation of skin and hair, maturation of hoof tissue, and many other functions. Goats that are mildly to severely deficient in copper will display one or more the of following symptoms: rough, discolored hair coats (red tinge on black hair or loss of pigment around the eyes); winter coats that are slow to shed out; decreased conception rates; increased days open; hoof problems and/or depressed immunity.

All SWEETLIX goat supplement products help goats attain maximum performance by providing complete vitamin and trace mineral supplementation including balanced levels of copper, selenium and zinc in bioavailable forms. These products are designed especially for the nutritional needs of goats.