Reproduction is arguably the most important production parameter in attaining profitability in a commercial goat operation. If does do not consistently produce at least one litter every 12 months, your costs per pound of kid raised will increase due to the costs of carrying open/non-productive does and/or sub-fertile bucks from year to year. Think of your goats as farmhands. You pay your farmhands a daily wage and in return expect a daily return in terms of work. Similarly, you pay to maintain does and bucks every day and in turn they need to provide you with milk, meat or mohair in order to “earn their keep.” Good management practices and good nutrition are critical for maintaining doe and buck fertility. Once energy and protein needs are met, goats need adequate levels of necessary trace minerals in order to maintain high levels of reproductive efficiency. 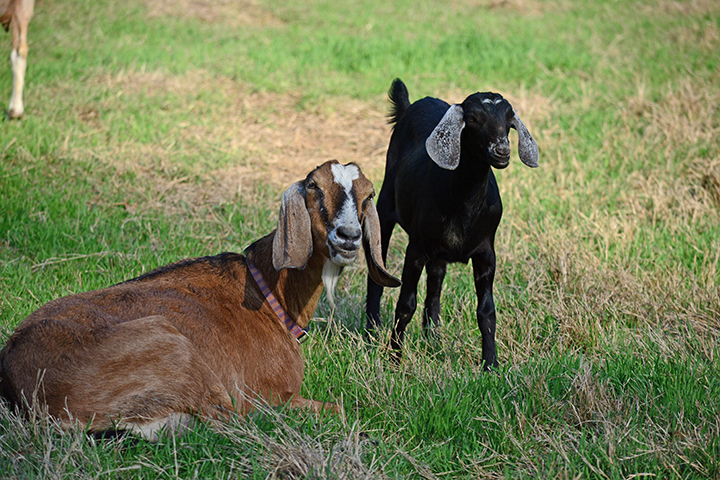 But don’t they get what they need from forages?

While most goats receive adequate mineral levels from available forages in order to survive, the vast majorities are not receiving the mineral nutrition needed for high levels of production. An important point to remember is that the mineral content of forages are limited by the mineral make-up of the soils. If it’s not in the soil, it can’t get into the plant. And while soil types vary, no one soil type provides optimum levels of all the minerals needed by goats, therefore mineral supplementation is advisable. Other variables such as plant species, plant maturity and climate conditions will also play a role in the mineral content of forages.

What minerals are needed and what do they do?

Minerals are loosely grouped into two categories: the macro-minerals and the micro- or trace minerals. Macro minerals include: calcium, phosphorus, magnesium, potassium, sulfur and salt and are needed in relatively large amounts in the body. The trace minerals include: cobalt, copper, iodine, iron, manganese, selenium and zinc and are needed in very small or “trace” amounts in the body. While adequate amounts of all of the above mentioned minerals are important to proper nutrition, copper, selenium, and zinc are deficient in most goat diets in the United States and therefore, I will focus on these trace minerals for the remainder of this article.

Various levels of copper deficiency are a serious problem for grazing goats and cattle in the United States. Copper is essential for enzyme functions, immunity, connective tissue metabolism and iron metabolism among other functions. It is theorized that reproductive efficiency is reduced due to alterations of enzyme systems caused by low copper levels. Copper deficiency can result in delayed estrus, reduced libido, decreased conception rates, infertility, early embryo death, necrosis of the placenta and central nervous system abnormalities in offspring. High levels of iron, sulfur or molybdenum in the soil or additional feed supplements can further exaggerate these deficiency symptoms.

Newborns are very dependent on copper acquired during the prenatal period since copper levels in milk are poor. Therefore, proper copper nutrition in gestating females is critical to body stores in newborns. Maternal copper deficiency has been linked to increased mortality and morbidity in lambs and calves.

Copper requirements of goats are not entirely known. Much of what is known of goat nutrition has been extrapolated from sheep and cattle research. The established copper recommendations for goats are 8 to 10 ppm in the total diet. However, recent studies with goats have suggested that goats may be able to tolerate higher levels of copper in their diets with no detrimental effects, at least temporarily. Optimum copper levels for enhanced growth and production in the Boer have not yet been established.

Selenium is an anti-oxidant that works in conjunction with Vitamin E to prevent and repair cellular damage in the body. Selenium and/or Vitamin E deficiency has been shown to impair immune response. Selenium is also associated with thyroxine, a thyroid hormone that regulates metabolism, reproduction, circulation and muscle function. Selenium also protects the body from heavy metals by forming complexes to render them harmless. Selenium is readily transferred through the placenta and milk; therefore, a doe’s selenium status will directly affect the health and thriftiness of her kids.

Most of the soils in the U.S. are marginal to deficient in selenium, but there are areas in the Western U.S. that are abundant in plants that accumulate selenium (for example locoweed). Severe clinical selenium deficiency can result in white muscle disease, characterized by stiffness and heart failure. Marginal selenium deficiencies can result in impaired fertility, silent heats, cystic ovaries and the birth of unthrifty kids with poor immunity. Selenium requirements in cattle have been shown to increase under the following conditions: high levels of legumes in diet, high sulfur intake, low vitamin E intake, and high levels of heavy metals in the diet.

The United States Food and Drug Administration tightly regulates selenium as a result of toxicity concerns. Selenium is highly toxic if excess amounts are consumed. Unfortunately, the amount of selenium required is very close to the toxicity level, thus great care must be taken when supplementing selenium. The maximum level of selenium that can be legally be fed to goats in the United States is 0.7 mg per head per day or 0.3 ppm in the total ration (dry matter basis).

Zinc is known to be essential for sexual maturity, and onset of estrus. Zinc plays a role in epithelial integrity, meaning that zinc is essential for maintaining the lining of the reproductive organs. Adequate zinc levels are vital for repair of the uterine lining following kidding, return to normal estrus cycles and maintenance of the uterine lining necessary for implantation of embryos. Inadequate zinc levels in cattle have been associated with abortion, fetal mummification, lower birth weights and prolonged labor. Zinc is also vital to sperm quality in males.

Zinc and copper also affect reproduction indirectly through hoof and joint health. Bucks that are lame will not actively seek out does in heat, follow and mount them. And even if they mount, they may not ejaculate due to associated pain. Therefore, structural soundness of feet and legs is vital to reproductive efficiency in bucks.

What if I feed trace-mineralized salt?

Just like you pay every month for car insurance “just in case” you get into an accident, it is best to provide a complete mineral supplement “just in case” your goats aren’t receiving adequate levels of minerals from forages. The cost of auto insurance seems high until you think about how much an accident would cost, then it seems like a bargain. In the same sense, the cost of mineral supplementation seems high until you factor in the costs in lost profits and reduced production caused by inadequate mineral nutrition. By maintaining high quality pastures you can meet the majority of your goat’s nutritional needs, but by providing free choice access to a complete mineral & vitamin supplement you can make sure that ALL of the goat’s nutritional needs are being met. For a cost of pennies per day, you can ensure that your production objectives are not being hampered by inadequate mineral nutrition.

These supplements are formulated especially for the unique nutritional requirements of goats. SWEETLIX goat supplement products help goats attain maximum performance by providing a complete vitamin and trace mineral package designed especially for goats. These products will deliver 100% of the daily trace mineral needs of goats, including copper, selenium and zinc, when fed according to label directions.

Rumensin® is a registered trademark of Elanco Animal Health